Discover the top 7 iOS development trends for 2020 you simply need to know to build a modern and innovative application. Let’s have a look at the future of iOS development.

What is the future of iOS app development? What are the crucial iOS development trends?

It’s safe to say that iOS is the platform of the future. Just think about this: in 2008, when the first iteration of the Apple App Store launched, users would find only apps 500 there. A decade later, Apple’s CEO Tim Cook announced that there were 20 million registered developers on iOS who made around $100 billion in revenue while catering to some 500 million weekly visitors to the App Store.

Impressive, isn’t it? Well, in 2020 these figures are surely even higher.

Together with Android, iOS will continue to be a leading mobile development platform. With the total number of iOS apps surpassing the 2 million mark, it has become essential for developers to keep a close eye on iOS app development trends. There’s no other way to build a mobile app with a competitive advantage.

This year, we’re bound to see some new trends and technologies take the iOS scene by storm.

Here are 7 iOS development trends for 2020 which are the future of iOS app development. You simply need to know them to build a modern and innovative application. 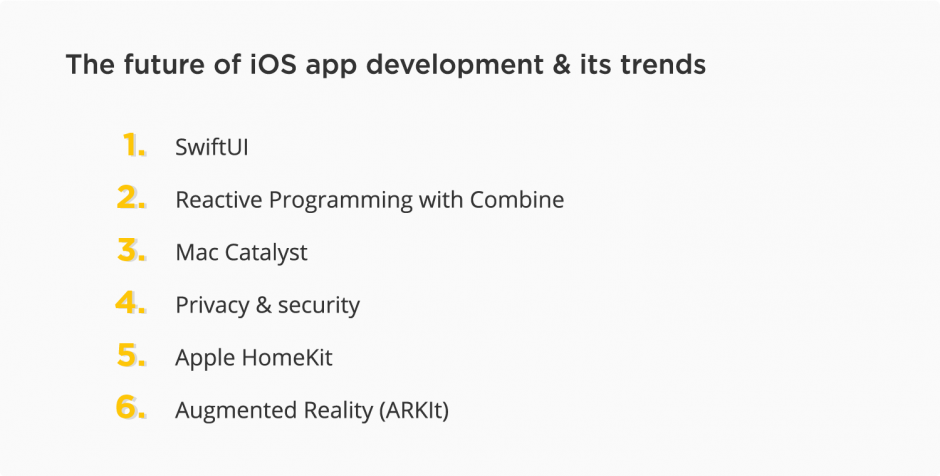 One of the key UI trends in 2020 is going to be SwiftUI, a user interface toolkit that allows developers to design apps in a declarative way. All it takes is simply telling SwiftUI how we want our user interface to look and work, and the tool will figure out how to make that happen when the user interacts with it.

To understand what declarative UI is all about, let’s contrast it with imperative UI. Before iOS 13, developers used only imperative UI. In imperative UI, a function can be called when a user clicks the button. Inside that function, we read a value and show a label. We can modify how the user interface looks and works on the basis of what’s happening on a regular basis.

But imperative UI raises many issues, in particular ones linked to the concept of the state. Developers need to track the state in which their code is and then ensure that the UI reflects that state correctly.

Contrary to imperative UI, declarative UI allows developers to tell iOS about all the possible states of their app at once. They don’t need to write code to move between the two states by hand. SwiftUI moves between UI layouts when the state changes on its own, based on what their developers told it to show when a user performs a specific action. This is the essence of declarative UI – we tell SwiftUI all the rules we want it to follow and leave the tool to enforce the rules.

Moreover, SwiftUI can serve as a cross-platform UI layer that works across iOS, macOS, tvOS, and even watchOS. Developers can learn one programming language and layout framework and then be able to apply their knowledge anywhere.

What is Reactive Programming? It’s basically a paradigm that handles streams of events (asynchronous data streams). This isn’t a new concept in software development, but it has recently become more prominent.

Here’s how it works:

Event streams are streams of values that we can operate upon. By using the operators bundled with a Reactive Framework, developers can transform a stream into a different stream in-place easily.

Reactive Programming is no stranger to the iOS platform. Developers could use a number of libraries to that end. The reactive pattern in iOS allowed developers to start thinking about how events work and depended on one another, as well as how it all affected the business logic.

This is where Combine comes in. It’s a framework created by Apple that offers a declarative Swift API for processing values over time. It basically solves the problem of nested closures that arise when we process async values over time. Combine provides developers with a high-level abstraction that enforces a model that works in terms of data streams entirely.

Here’s how it works according to the Apple Developer Documentation:

“Combine declares publishers to expose values that can change over time, and subscribers to receive those values from the publishers.

The Publisher protocol declares a type that can deliver a sequence of values over time. Publishers have operators to act on the values received from upstream publishers and republish them.

At the end of a chain of publishers, a Subscriber acts on elements as it receives them. Publishers only emit values when explicitly requested to do so by subscribers. This puts your subscriber code in control of how fast it receives events from the publishers it’s connected to.”

Developers can use Combine to put together the output of multiple publishers and coordinate their interaction. As a result, they get to write code, which is easier to read and maintain. Combine also allows us to centralize the event-processing code and eliminate problems like nested closures and convention-based callbacks.

In 2020, more developers will be using Mac Catalyst to build native Mac apps from their iPad apps. Mac Catalyst allows the apps to share the same project and source code. That’s why converting an iPad app’s desktop-class features for Mac (and adding more features) is easier than ever.

All you need now is the latest version of Xcode 11. By selecting the “Mac” checkbox in the project settings of an iPad app, you can create a native Mac application – and then expand it with new features. The two apps will share the same project and source code, so you can change the code in one place.

Mac apps created that way will run natively, and use the same frameworks, resources, and runtime environment as apps built exclusively for Mac. The tool will add Mac desktop and windowing features. It will also adapt touch controls to the keyboard and mouse.

The developments in security protocols will remain a key iOS development trend in 2020. Apple is generally known for its advanced security layers and strict policies that prevent anyone from breaching into its devices.

The company aims to create a safe environment for its app users, focusing especially on privacy and security issues. The idea is improving overall security and prevent cyber-attacks and data breaches from happening.

That makes a lot of sense considering the recent reports of data breaches and hacking.

For example, Apple has deployed the ASWebAuthentication Session, which coordinates the cookies and site data for signing in. It allows devices to use authentication services frameworks to include password manager apps.

Apple HomeKit will be another important trend in iOS development this year. The framework allows developers to configure accessories and create actions to control them. HomeKit enables apps to coordinate and control home automation accessories from multiple vendors – presenting it all on a coherent user interface.

Using HomeKit, developers can build apps that discover HomeKit-compatible automation accessories and add them to the cross-device home configuration database. It’s also possible to display and edit the data in the home configuration database. Moreover, HomeKit enables apps to easily communicate with configured accessories and services to haven them perform actions like turning the lights on.

Apple HomeKit will make building home automation apps much easier – and secure! At this year’s WWDC, Apple announced HomeKit in routers, as well as a more secure video from HomeKit-enabled webcams – addressing a key issue in the Internet of Things (IoT) implementations.

Another of the key iOS development trends has to do with Augment Reality (AR). ARKIt is the largest AR platform in the world. ARKit 3 Reality Composer is a must-have tool for anyone looking to build an AR iOS app in 2020. Developers are also going to benefit from RealityKit, a high-level augmented reality framework that makes building AR apps so much easier.

ARKit 3 includes a feature called People Occlusion, which allows apps to know where people and AR objects are located, and then properly occlude the scene. The Motion Capture feature tracks human movement to serve as the input to the AR scene. The feature also supports collaborative sessions and can track up to three faces at a time. Developers can use these features to integrate human movement into their apps easily.

What else does ARKit 3 offer to development teams? Here are a few other features:

Flutter offers a brand-new, more productive way of creating mobile applications by combining the advantages of a native framework with being cross-platform.

In the past, Flutter was only available for Google products like Android or Chrome. But everything changed when Flutter became a cross-platform framework. As the technology matures, more iOS developers will be turning to Flutter in 2020. Flutter app development becomes more and more popular.

Flutter was built on Google’s in-house programming language Dart. Since the programming language can compile to the native iOS code, it’s possible to use Flutter in iOS development as well – and benefit from its many features like hot reload that boosts productivity. For CI/CD, Flutter comes with Bitrise.

For building UI, iOS developers can use Cupertino widgets. Even if Flutter is a cross-platform solution, developers can create a different UI for Androids and iOS apps. Here you can see the iOS app which we recently made with Flutter: in10 – an event app offering advanced RSVP and ETA tracking.

To learn more about Flutter, read these articles:

This year, we will see many iOS development trends solidify their presence on the mobile development scene.

Flutter is only going to become bigger, and developers will take advantage of new tools for building IoT and AR applications. However, I’m sure new iOS development trends are just around the corner, and we will see some of them already this year.

Read also: How to Publish your iOS App on the App Store

Are you looking for iOS developers who know the latest trends and can build a modern iOS app for you? Get in touch with us. Our experts help companies to build applications that take advantage of the latest innovations in iOS development and deliver tangible business value to their users.

LET'S TALK ➜ or just write an email
Not ready for an estimate? Write to us and book Product Design Workshop to clarify your vision and prepare the crucial documentation.

LET'S TALK ➜ or just write an email
Not ready for an estimate? Write to us and book Product Design Workshop to clarify your vision and prepare the crucial documentation.