Background: The lack of addressing in Libya

Libya was facing an ever-growing problem – a lack of official addresses paralyzed the economy and stalled innovation. Our client Lamah decided to respond to this problem by creating Makani – a revolutionary GPS navigation app to change the lives of millions in Libya for the better. How?

They divided the biggest Libyan cities into multiple zones and designated each one an alphanumeric postal code. Then, they ascribed a unique number to each home and business. And that was just the beginning of the mapping revolution in Libya.

Lamah’s goal is to accelerate the digital development of Libyan society by providing incomparable innovative solutions. We’re happy that we can participate in this process by delivering digital products that bring our client’s ideas to life.

The idea behind the Makani app is one of a kind and unprecedented in Libya, where postal codes barely existed. To be in line with the common concept of addresses in other countries, our app provides individual/digital codes instead of geographically descriptive addresses.

Makani is a mapping revolution in Libya.

We developed a GPS navigation app that gives users detailed and clear addresses for buildings in Libya, whether they are houses, governmental or private institutions, or even shops, markets, restaurants, and others. The first version of the app was publicly launched in December 2019.

Makani moves Libyans from the use of difficult descriptive addressing to smooth digital addressing and enables the navigation of geographical locations within the country. It helps users to locate places within their region through a digital map that allocates specific postal codes to almost all locations.

This is vital to this society, as they’ve been deprived of such amenity.

The app is available for free on any iOS or Android smartphone, making it finger-tip accessible. Makani is positively rated by its users – in the Apple store at 4.5, on Google 4.2.

In 3 months after launch, the map contains more than 430,000 addresses from nearly 180 cities in Libya. We are constantly developing new features. What’s more, the app’s users are adding new addresses. All in all, the Makani app is growing.

It’s worth stating that Makani brings many opportunities and benefits to businesses in Libya. By providing their addresses, companies are easily accessible to customers. Moreover, various government agencies can access and use their information in the e-government system.

The app does not exclude foreigners from having access to the app or making use of it. With businesses growing and thriving in many parts of the country, connectivity is essential.

We’re in the process of developing another navigation app for our client Lamah.

The scope of the project

According to our client’s guidelines, Makani looks the same on both Android and iOS platform. The app supports both dark and light modes, which makes the app user friendly.

What’s more, we’ve created many custom elements that gave the navigation app a unique character. Each category of icons has its own palette of colors that harmonize with each other.

We developed a revolutionary GPS navigation app that gives users detailed and clear addresses for places within Libya through a digital map that allocates specific postal codes to almost all locations.

Makani was publicly launched in December 2019. Now, we are improving the app by implementing new features.

4 months after launch, the map contains more than 430,000 addresses, from nearly 180 cities in Libya, and is positively rated by its users.

When it came to the API, our scope mainly focused on integrating the mobile apps with Lamah’s addressing data. Doing so was vital for synchronizing data and optimizing address data, which was used for API-based features such as search functionality and points of interest, as well as user-related features, like registrations and address suggestions.

The goal was to design scalable architecture which will allow us to work efficiently on new features, as well as to be prepared for the changes on our client’s addressing data system. 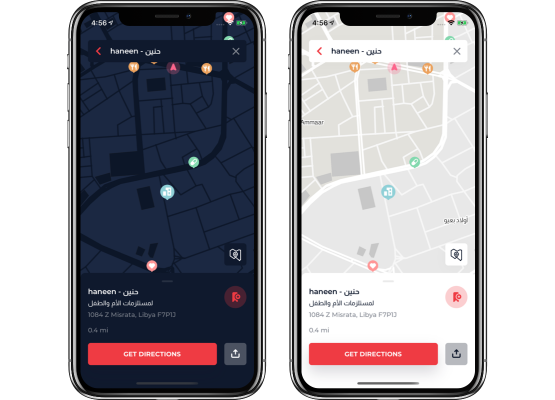 Users can use the map offline. Search for addresses, display points on the map, add them to favorites, and much more without Internet access. It is a crucial feature due to conditions in Libya where the coverage and availability of the Internet are limited. 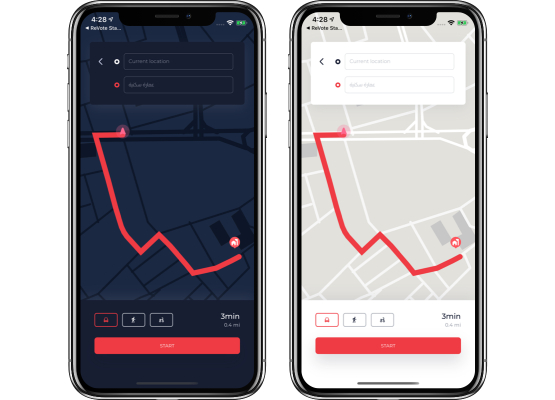 Mapping the route to a selected place

Users choose if they want to reach the address with a car, a bicycle, or on foot

Navigation to a selected address 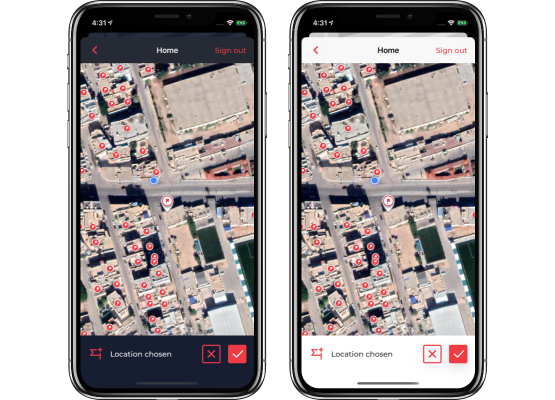 Choose a point on the map and click to add an address. The app will generate a new address for this place! 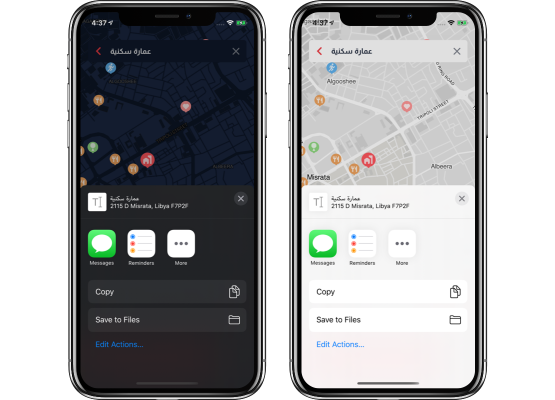 Sharing addresses with other users 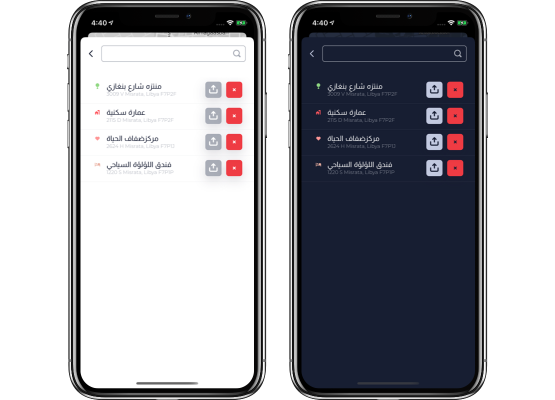 You can save your favorite addresses and create your own directory for quick access when needed. You can also specify your home address. 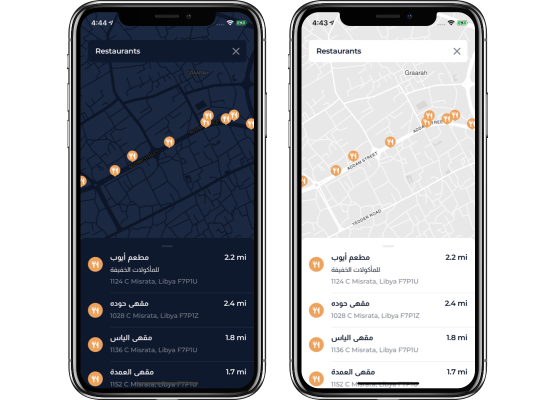 Enjoy easy access to all places in Libya. Search for a specific address or click on an address where you want to be navigated. 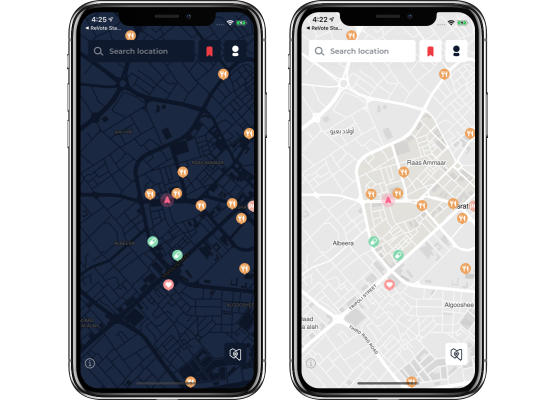 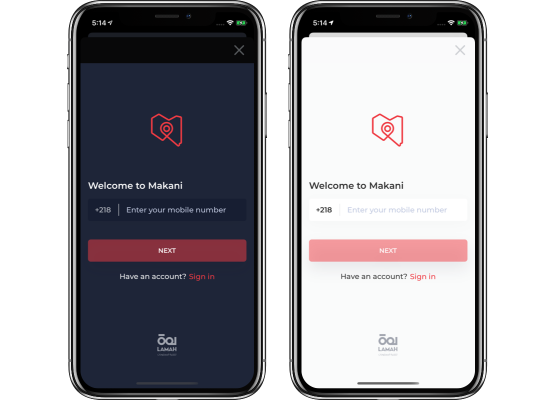 I really appreciate the communicative collaboration among their team and with us on a personal level. Astounding organizational skills and scheduling abilities and resources. Highly specialized with project management tools.

Time is highly of essence to them. They are very efficient and punctual with deadlines. Care for customers and impressive capacity of handling situations that might jeopardize their clients’ projects.

The team generously provided advice, suggestions, expertise in their field of work for the benefit of our project assuring that it would not only be executed, but also further developed and improved. Our experience with Droids On Roids is outstanding, and we look forward to future collaborations.

Get an advance on your next paycheck

Entrust your navigation app development in the best hands

ESTIMATE NAVIGATION APP or just write an email
Not ready for an estimate? Attend Product Design Workshop to clarify your vision and prepare the crucial documentation.
See more case studies

What is a navigation app?

A navigation app is a location-based mobile app that determines your location on a map and navigates you with turn-by-turn directions in real-time to a chosen destination.

The core features of a navigation app

How does a location-based app development process look like?

There are 7 crucial stages of the navigation app development process from a business point of view:

Read more about every stage in our guide through the mobile app development process.

How to choose the right Navigation App Development Company for your project?

You’ve decided to make an app with a professional navigation app development company. The process of choosing the right partner may seem challenging for businesses or entrepreneurs, especially if you are doing it for the first time.

If you want to pick the best mobile app development company for your GPS navigation app, you’re probably wondering how to do that.

We recommend you to verify a few factors when considering cooperation with a navigation app development company. Here’s a checklist:

If you want to learn more about each of the above points, read our guide for businesses on how to choose the best mobile app development company.