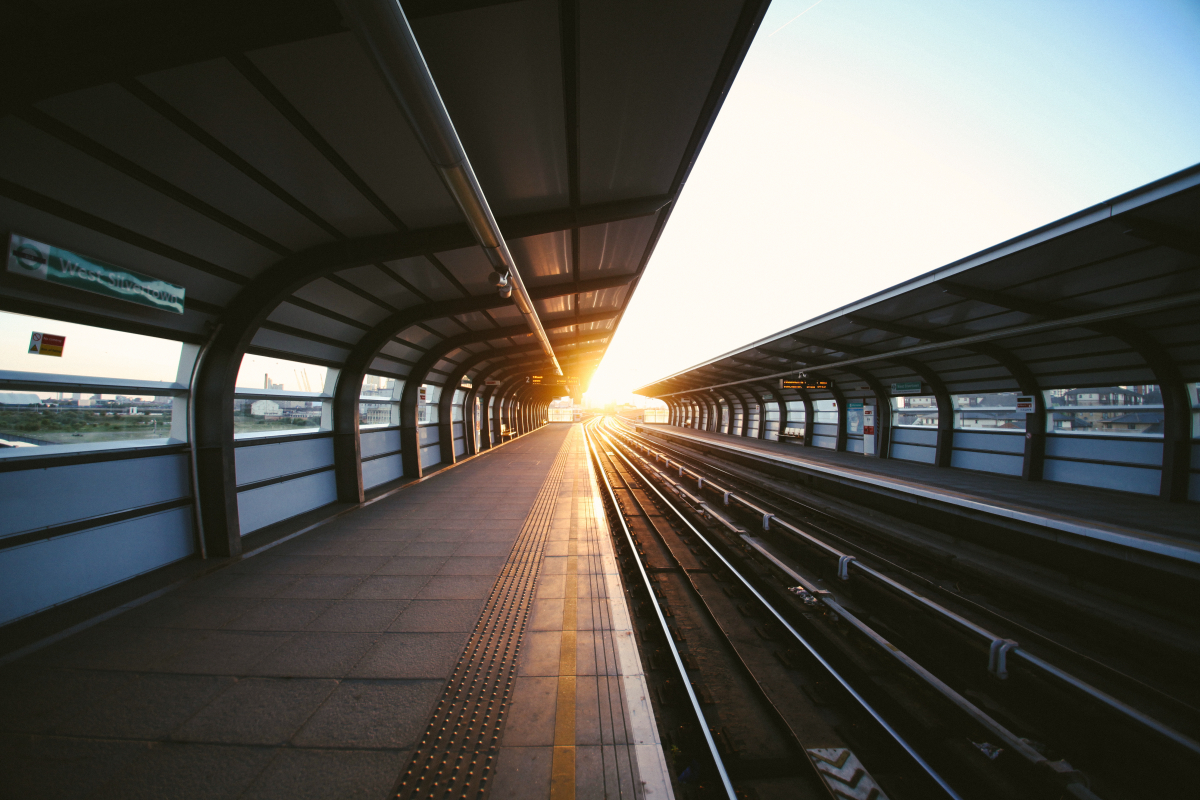 Why another RxJava example?

There are a lot of RxJava articles with examples which explains what it is and how to use it. But mostly there is just a code. Even if there is also an explanation through the analogy, the most popular word is a ‘stream’. Usually the code example is just perfect (we are programmers, right?), but RxJava is very different from what we do daily during Android development. The code is not enough in the beginning to understand it. Stream is not enough. Even marbles examples are not enough. I can speak for my own, but guys, to be honest, didn’t you need more examples by analogy i.e. to some kind of reality? Didn’t you create one in your head to understand the RxJava way better? I did and I want to share it with you. 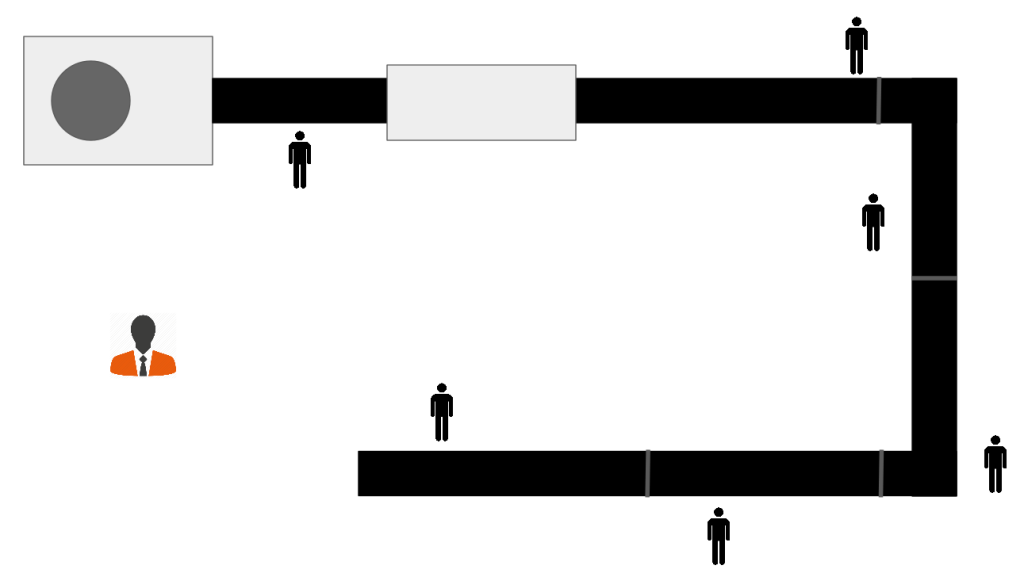 Let’s imagine that we write an app which displays information about animals and we’ve got request to implement new screen with following functionalities:

Let’s try to implement those functionalities in production line with the help of some workers.

1. First of all we should start a production process. Production line itself is not enough – someone has to run it. For example a Production Manager who is interested with the result. 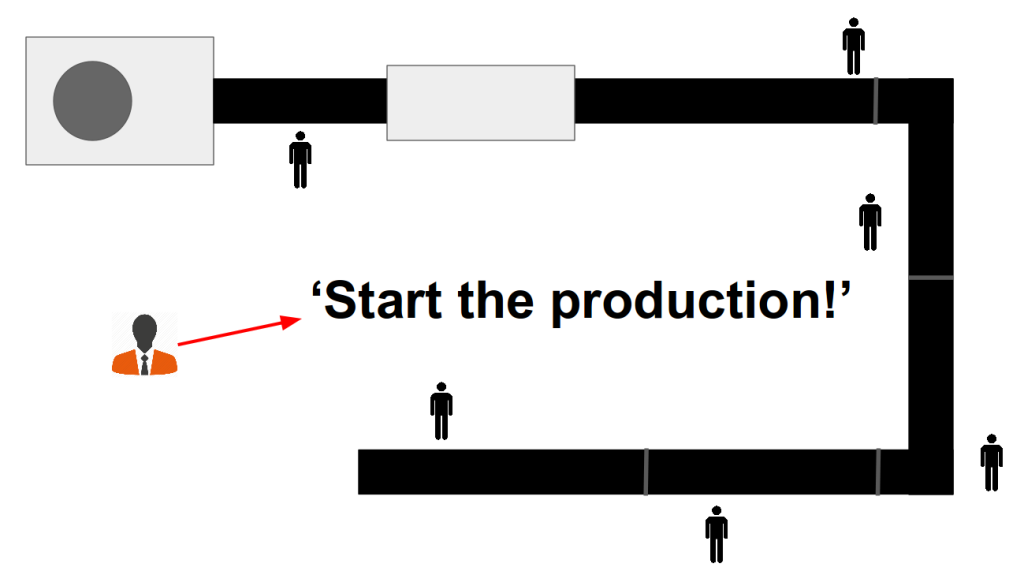 2. Now we should get these random cat facts. But how? We are lucky because there is an API for it! Coincidence…? So let’s GET the facts. 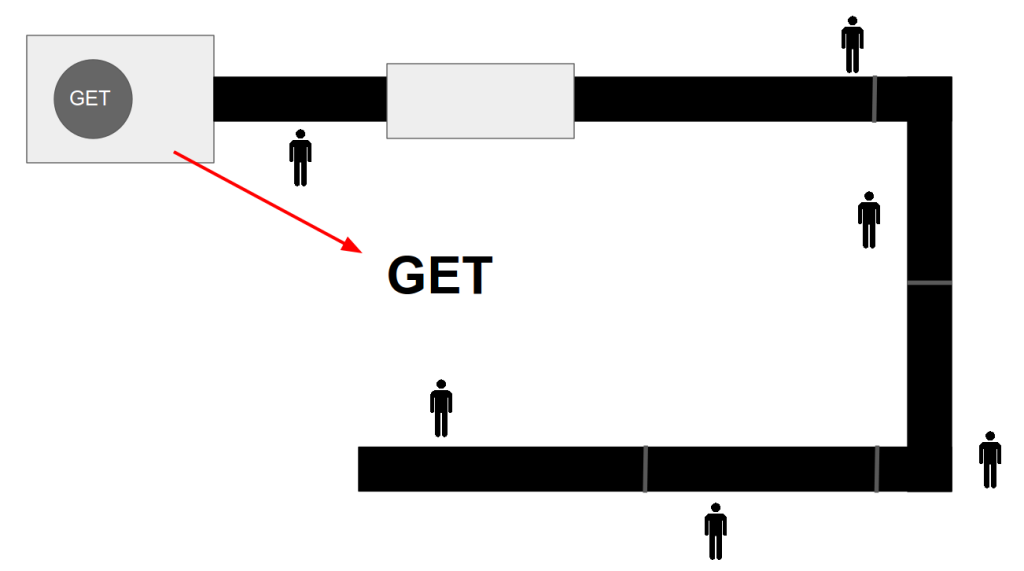 3. We should handle the response from API. It consists of HTTP status code and list of cat facts. We don’t need the status so the first worker at the line simply removes it and pass only the facts list. 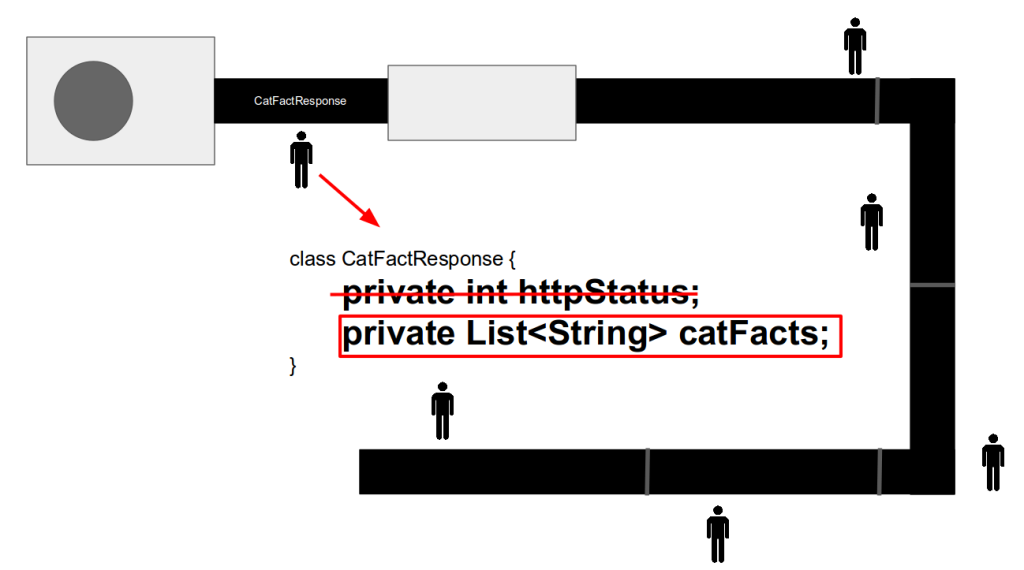 4. Next thing to do is to separate each fact from the list. Why? Because it will be more convenient for other workers to operate on a single String (i.e. to check if it’s not too long). 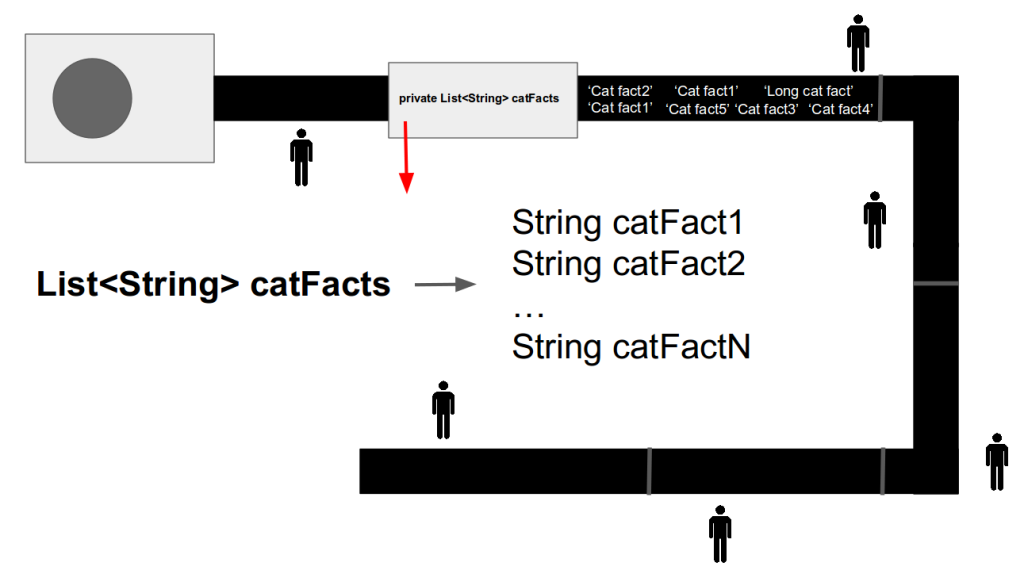 5. Each fact should be unique. Next worker eliminates each repetition. 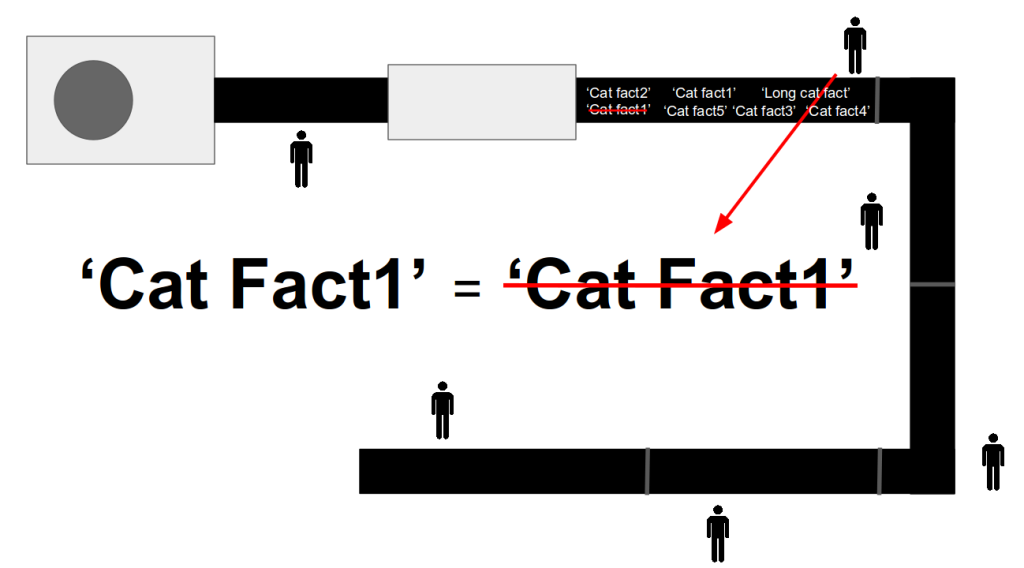 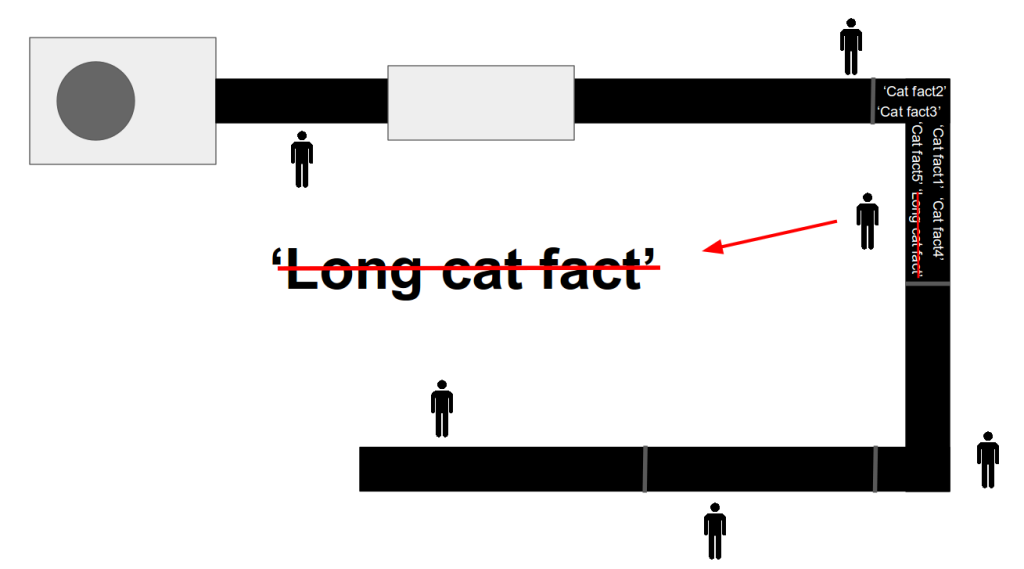 7. We have got now unique and not too long facts but they are too many. We just need only 3. Next worker will not pass more than that. 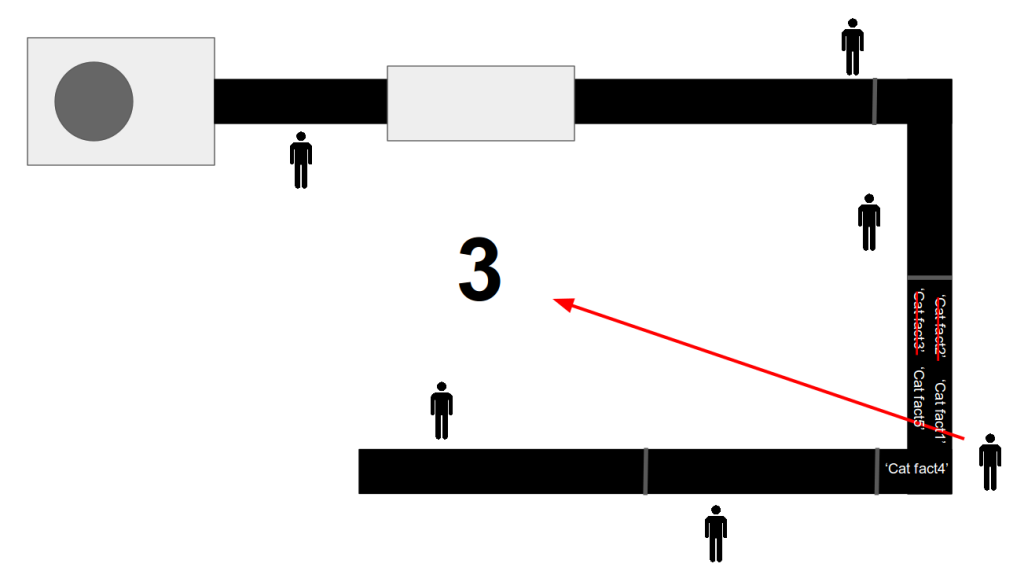 8. Each fact should also have some random image with cat. 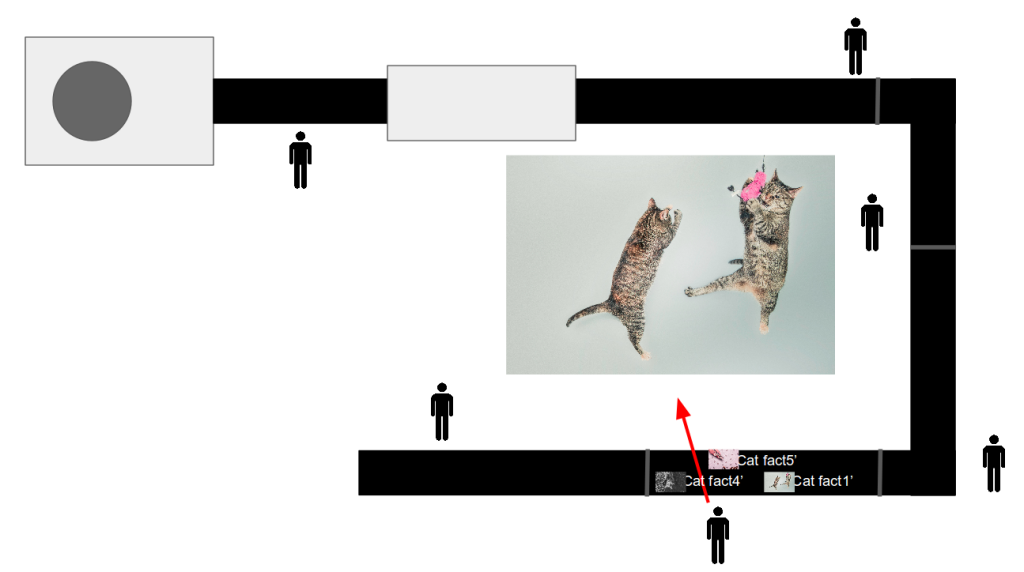 9. We won’t give the Production Manager each fact separately. We should pack they first to one list. 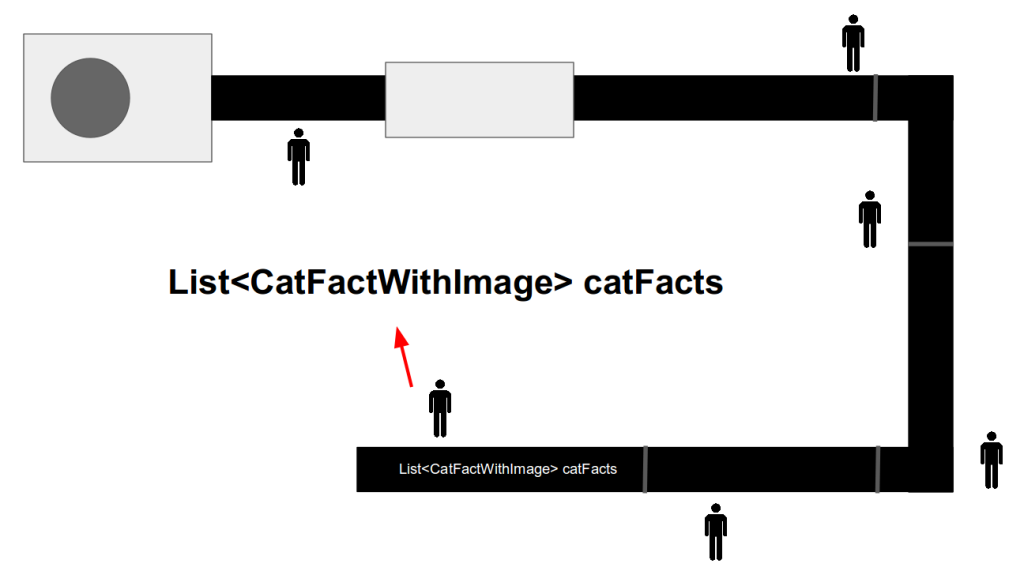 10. Now the Production Manager can display the results on a screen. 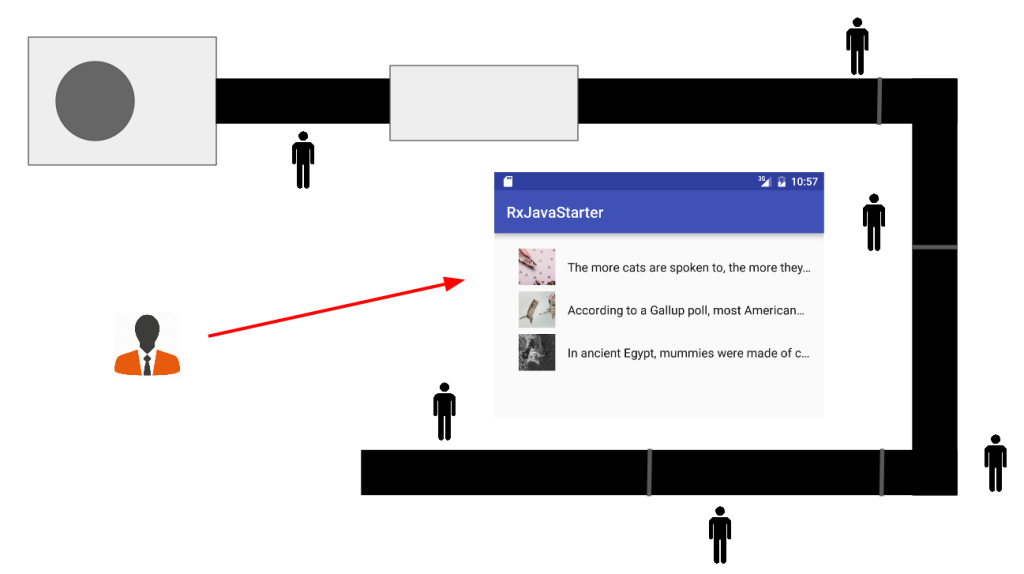 And that’s it. We’ve just implemented whole functionalities and display the result on the screen with the use of production line and some workers.

What does this have to do with RxJava?

What about workers who are working at the line? In RxJava world they are called Operators. They act exactly the same as the workers – they should do something with the emitted data (i.e. pass only the unique ones).

Great. Couple of images and so what? Code is code but not a production line… isn’t it?

In fact RxJava code is. To understand that you should look at above code from up to bottom. Every action is run sequentially – one after another.

Let’s look close on each Operator that we used.

I expanded the whole implementation in case that you feel uncomfortable with this fancy arrows (we are able to pretend that we use Java 8 lambdas – see retrolambda).

As you can see mCatFactsService.getCatFacts() returned some data and it was put to CatFactResponse, but we don’t need HTTP status code in this case, so we MAP CatFactResponse object to another object – List<String> with the cat facts. Next Operator will be working with that list.

FlatMap Operator gets cat facts list, take each fact separately from that list and ‘throws’ it down to the next operator. So we take and ‘throw’ each fact FROM the list.

This operator handles repetitions and won’t pass any String that has already occurred. Each one should be DISTINCT.

Filter is just simply a true/false expression. If String is too long, it won’t pass. So filter (obviously) FILTERS.

Another map Operator. Before we pack all the Strings we should add to each of them a picture with cat.

Now we can pack all CatFactWithImage objects TO one LIST.

And that list just pass to adapter. That’s it.

RxJava is a powerful tool. Unfortunately it’s not that easy to understand it and understand how to use it if we have never been writing in a ‘stream’ way before. This way is very different from what an Android Developer do daily so I needed something more than code to understand it. I hope that this article helped you to understand better of how RxJava is working.

Complete project with example can be found on Droids On Roids Github.

11 responses to “RxJava – the production line”